We’ve all seen the mega launches of super expensive products that boast about how heavy the packing box is. 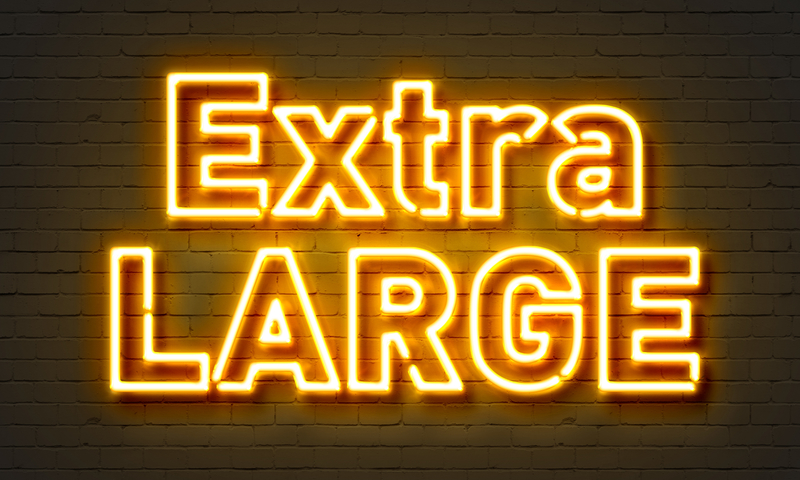 As marketers we suspect that bigger is better, even when it’s not. After all, more of anything seems like a better deal to the customer than less of something, right?

But thanks to a new study, we now know that “more” of a product not only sounds better – it can also be a status symbol for the customer.

And believe it or not, they can actually make the purchasers feel BETTER about themselves.

No, I am NOT advocating you run out and buy one of these things – rather, I’m suggesting you SELL these things, in digital form.

Follow closely – This is from the Journal of Consumer Research and it concerns a series of experiments carried out by Derek Rucker of the Kellogg School of Management at Northwestern University.

In the first experiment, volunteers looked at photos of people holding different sized drinks and then were asked to rate the STATUS of the people they saw in the photos. Tabulated results showed that the bigger the drink, the higher the status score each photo rated. No, I’m not kidding, and it gets weirder.

Okay, here comes the surprise – next those same volunteers were offered a drink in 3 different sizes. There was no choice on what KIND of drink, only of what SIZE drink they could have.

Those who felt the least powerful CHOSE THE BIGGEST DRINK. In other words, even in something as ordinary as choosing a drink, the decision is not based solely on how thirsty the person is, but rather on how much power they feel they have.

And in the worldwide economy, it’s a reasonable conclusion that as people feel powerless to control what’s happening, more and more super sizing will be taking place, and not just in food.

Now then, here’s how to use this in your marketing…

First, when you can make your product appear larger, do so. For example, you might take each chapter of an ebook and separate it into a report – 12 reports look like more than one ebook. If you are shipping audios or videos, place them on 12 discs rather than 4. And so forth.

Second, offer a super size version of your product. That is, you might have your regular product and a second version that offers more information, more promises, more benefits, etc.

Third, offer them power and prestige. For example, if you’re creating a membership, don’t make it just any old membership. Give it a name like The Exclusive Gold Club for Star Class Members or something that conveys the power and prestige so many people are lacking in these uncertain times.

Fourth, don’t forget to add an OTO to your offer. OTO’s are like supersizing the fries – they’ve already decided to order, now it’s just a matter of offering them more, and many times they will jump at the chance to upgrade to that virtual Big Gulp.

One more thing… Don’t feel guilty about up-selling your customers. People want to feel they are in control, that they have power, that they do matter. And if it’s a choice between buying a few Big Gulps that are going to rot their bones and pack on the fat, or your new product that can actually HELP them, you’ve got a duty to offer them that product and let them decide for themselves.